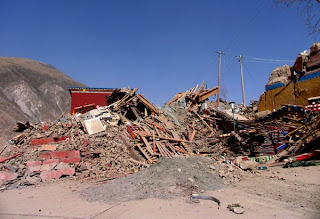 The government that rules over us and the earth that lies beneath our feet are two forces we ordinarily count on to lend our lives stability and security. After the political turmoil of recent years, to have the earth churn in Tibet as well is asking more than most hearts can bear. Yet this is precisely what happened on April 14th, in eastern Tibet, at 5:30 am, an hour when the monks gather in the assembly hall pictured here to pray for peace and to set their minds on a firm course of virtue for the day ahead.
The home monastery of Thrangu Rinpoche--the abbot who granted our newest nun, Karma Lodro Drolma, her vows, was utterly demolished in this 6.9 earthquake that devastated eastern Tibet two weeks ago, while we ourselves were in retreat conditions here in India. Thrangu Monastery had been rebuilt with great effort and care after it had been leveled during the Cultural Revolution, and is once again reduced to piles of stone and timber. This time, not just the monastery's most precious statues and scriptures, but also the lives of 23 of the monastery's monks were laid to waste--lives that themselves had been dedicated to the service and well-being of the world.
The monks who had been staying apart in strict isolation for the three-year meditation retreat that is traditional in this lineage broke the bounds of their retreat to offer their own service to the survivors as well as the deceased. The following video news report, while not the most sophisticated in its presentation, is precious for its images of the monks of Thrangu Monastery, comforting one another, and engaging in sleepless prayers for those of their brethren no longer there to be comforted. One monk is first pictured, his nose staunched for nosebleeds as he helps another injured monk hobble along, and later engaging in intensive prayer for the deceased. Skip ahead if you like and just watch the last 80 seconds, from about minute 1:20.
Updates on the state of affairs in Thrangu Monastery can be found here.
His Holiness the Gyalwang Karmapa sent messages to his sangha and to this disciples, guiding us in our response, and we share them with you here:
As you know, a devastating earthquake recently struck the area of Yushu in Tso-ngön [Qinghai Province]. The earthquake took the lives of tens of thousands of humans and animals and left many survivors with serious injuries and intense physical and mental trauma. On top of all of this, Thrangu Monastery saw the destruction of its temple and its precious contents, as well as the deaths of several members of the monastic community. In short, the region and its inhabitants have undergone unbearable loss. Please think of both the survivors and the deceased with love and fondness. I humbly request you to thoroughly pray for them and dedicate your virtues to them with a heart of great compassion. and from an earlier letter:
When I heard this tragic news, I was very saddened at the loss, and began immediately to offer prayers for those who have been affected by this incident, both those who have lost their lives and the survivors. May those who have died be freed from the bardo state of terror and suffering of such an unexpected death, and be reborn in the pure lands or a higher realm. May the survivors who have undergone the suffering of loss of relatives and friends and the trauma of losing their homes be comforted and find relief. May they receive the emergency help they need as soon as possible, and be able to rebuild their lives. I will pray ceaselessly for this. In addition, I would ask everyone to contribute, directly or indirectly, to the relief work. I have instructed the Karmapa Foundation in America to donate $200,000 for immediate aid for the victims of this disaster and to help with the task of rebuilding. I have called on all Buddhists and compassionate people to pray sincerely for the victims of this earthquake, and to do their best, according to each one’s capacity, to become involved or sponsor different kinds of relief activity so that it will be effective.
Death and impermanence is an integral part of life. When this kind of disaster strikes, may the power of the natural goodness within all of us provide physical and mental comfort and the courage to start anew. When you are happy, dedicate that happiness to all beings,
so that happiness may pervade the sky.
When you suffer, you are bearing the suffering of all beings.
May the ocean of suffering become dry completely.
We join our voices in asking you to think with love of those who were killed and those who bear the particular burden of surviving such trauma. For those who are moved to contribute towards creating a monastery home for the surviving monks for the second time in the past few decades:

The people and the monastery are in great need of help. Many are seriously injured, and all are homeless in the high altitude’s cold weather. Donating now will give them hope and make a big difference in their lives. The quickest way to help Thrangu Monastery is to donate directly to Lodro Nyima Rinpoche’s (Abbot of Thrangu Monastery) foundation account in Hong Kong. He can then withdraw funds directly from inside the disaster area. In particular, they desperately need rice and flour to feed the survivors. Here’s the wire transfer info:

You can also make direct, tax-deductible donations to the efforts at Thrangu Monastery by going to the following websites:

Accepts donation by check or bank draft. See their website for details. 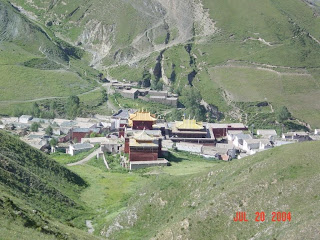 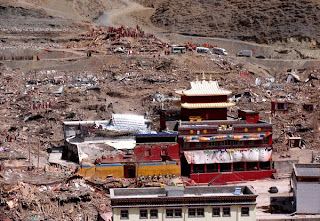