For those considering joining the annual winter flourishing of Dharma in Bodhgaya, India, here are some dates:

December 8 and 9th - Opening Ceremony to mark the 900 years of the Karmapa incarnation, which began with the birth of the first Karmapa, Dusum Khyenpa, in the year 1110.

December 10 through 12 - Teachings by HH Gyawlang Karmapa on Atisha's Lamp for the Path to Enlightenment. These teachings will be held daily from 9:00 - 10:30am and from 3:00 to 4:30 pm daily, Indian time, and will likely be webcast live, with translation available in numerous languages. We will post more information here on the webcast plans as the time draws near.

December 15 through 22 - Kagyu Monlam. More details of the daily schedule of the monlam. each day from Dec 15 through the 19th, HH Karmapa will teach from 9:00 am to 11:00 am on the King of Prayers, also known as the Aspiration Prayer of Samantabhadra. These teachings will also be webcast live, in all likelihood, and we will post more details as they become available.
Posted by damchö at 7:35 PM No comments:

His Holiness the Dalai Lama´s Upcoming Teachings in Dharamsala

Today we begin two days of teachings with His Holiness the Dalai Lama on the Diamond Cutter Sutra.

Since a few people have asked about visiting Dharamsala, for your convenience here is a list of dates of the upcoming teachings by hh the Dalai Lama here at his own temple in Dharamsala. Of course, our community will be attending to receive these teachings.

Teaching in Dharamsala, HP, India from August 28 & 29: His Holiness will give two-day teachings on The Diamond Sutra at the request of a group of Koreans.

Teaching in Dharamsala, HP, India from September 8 to 10: His Holiness will give three-day teachings on The Heart Sutra (sherab nyingpo) & Gyalsey Thokme Sangpo's 37 Practices of A Bodhisattva (gyalsey laklen sodunma) at the request of a group of Southeast Asians.Contact Website: www.tibetanbc.org

Teaching in Dharamsala, HP, India from October 4 to 7: His Holiness will give four-day teachings on Nagarjuna's The Fundamental Wisdom Treatise on the Middle Way), Atisha's Lama for the Path to Enlightenment, Tsongkhapa's In Praise of Dependent Origination & Tsongkhapa's Concise Stages for the Path to Enlightenment at the request of a group of Taiwanese.


Teaching in Dharamsala, HP, India from November 30 to December 2: His Holiness will give three-day teachings on Gyalsey Thokme Sangpo's 37 Practices of A Boddhisattva at the request of a group of Russian Buddhists. Contact Website: www.khurul.ru & www.savetibet.ru
Posted by damchö at 6:28 PM No comments:

Many Moods of Monsoon 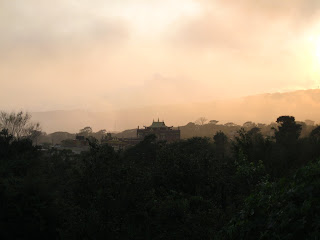 Along with the many mysterious new forms of mold that grow here in the monsoon, the season also has its own particular moods.

These moods seem at times to be better expressed in images than in words, although one of the finest pieces of Sanskrit poetry has a cloud as one of its main protagonists, and the monsoon is a favored setting for some of the most moving literature in the language.

All these photos are taken from the roof or balconies of our home. 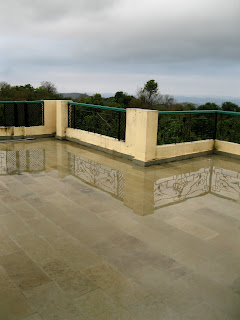 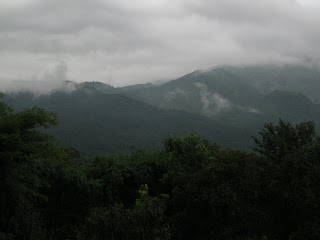 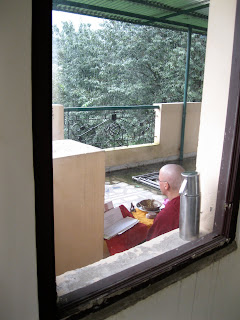 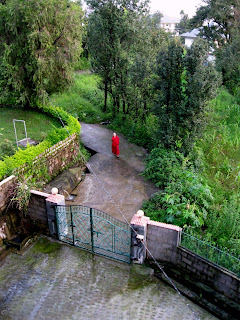 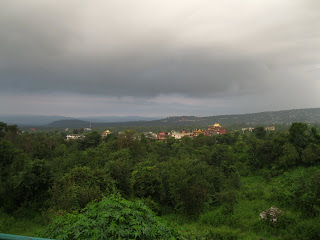 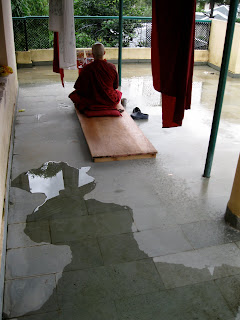 When mudslides in remote corners of the Himalayas make international news, you know it must be very serious. The following two letters offer eyewitness account of the recent disaster in Ladakh -- the worst anyone now alive there can recall -- as well as a way to help. The letters were written by a German friend of our community who happened to be there at that time, ostensibly to do research. The disasters affect areas that Drolma and Damcho visited when His Holiness the Gyalwang Karmapa was there teaching in 2008. We had tea with the family of a Tibetan friend in Camp 12, where so many families lost their homes. As yet, we have no word as to whether he and his family survived or not.

The family I stay with and I am fine, but here many people died, the number of bodies found is about 140 by now, but still more than 500 people are missing and more than 1000 houses were destroyed during one night Thursday to Friday. The areas which got hit at worst were in Leh the governmental hospital, radio station and busstand, and the villages of Phyang and Saboo, but also Choglamsar, where I live right now. We were lucky since the huge landslide and mud disaster didn"t hit our part of the refugee camp, but we had to flee in the middle of the night since a big river appeared right next our house. We had some minutes to collect 7 children, grandma and grandpa and us 5 people of the generation inbetween, free the 4 dogs and collect some things, and leave the house, all and everything in one jeep. Hundreds of people were not so lucky and got buried under tons of mud. The rain finally stopped and our house and the area around didn"t get destroyed, but since nobody knew and knows how things will develop, we moved to another place which hopefully is more safe. Situation is very bad, many dead people, people missing and many injured; bridges, roads, mobile and telephone, hospitals, radio station and much more got destroyed or severely damaged.

On Sunday morning I managed to get out of Choglamsar and go to Leh. Yesterday I helped to carry the mud out of the hospital and everybody including me goes here and there and tries to find out whether the dear ones are well and alive. Researchwork is not possible since the situation is far beyond asking someone for an interview or taking individual photos.

It would be helpful to collect some money, I think. WIll send photos of destruction when possible, now internet is too slow.

The recent natural disaster in Ladakh hit not only Leh, nearby settlements and the Tibetan refugeecamp Choglamsar, but all villages along the Indus, villages in Nubra valley as well as in the Markha valley and in the Changthang area. This list is not complete---

The actual numbers as given by the Ladakh Buddhist Association - which is one of the major groups organizing volunteers and collecting / giving donations to support Ladakhi flood victims are as follows: 200 people died, 800 are still missing, 500 people are severely injured. The houses of more than 1000 families are destroyed / severely damaged; 15 schools, governmental hospital in Leh, the radio station and telephone exchange as well as 5 major bridges and 20 village bridges have been destroyed / completely damaged. Also people lost cattle and crops, and all kinds of properties.

This situation is the result of the worst natural disaster Ladakhi people can remember. Still there are lots of rain clouds, many looks go up to the sky to check the weather condition. The number of people camping high up in the mountains surrounding Leh to be safe in case of further floods is still immense.

Cleaning and repairing goes on everywhere. Through the efforts of lots of people working together the hospital could be cleaned compeletely within a few days. The army and different road building organisations work hard on clearing the roads of mud and stones, and repair roads as well as bridges. The linking highway to Kargil was re-opened today, the highway to Manali was re-opened between Manali and Sarchu, while there are still 20 km of road to be reconstructed between Leh and Sarchu.

A lot of help is needed for both, providing the nasic needs for flood victims immediately as well as reconstruct houses, and the whole infrastructure which got destroyed.

In Choglamsar, which belongs to the areas which got hit worst, Camp No. 12 has the most losses and damages. Of 63 families, the houses of 34 families got destroyed. Since the whole area is contaminated by the destruction through the flashflood and huge mud landslide, all families had to leave the area.

Now, all these families live in tents in camp No. 2 in Choglamsar. Some basic infrastructure is provided by the Indian army and government such as the tents and some basic medical aid. Apart from that, these people who lost everything got no institutional help so far.

Please help me to collect some money now to be able to provide some basic help where needed most urgently!

Starting from today, there was no money for providing food for the people who lost their homes in Choglamsar. In the name of Tara Trust and Bodhicitta e.V. Germany, I gave money for providing 3 meals for all the 180 people for one week to the groupleader of the camp. Apart from that, at the moment I try to help old people who have no children and support, by buying food and bring it to their homes. During the next days, I will check further possibilities for a useful support of the flood victims.

If you can help, every Euro is useful!

If you can give a donation, please do this via the following organizations which send your money directly to me here in Ladakh: